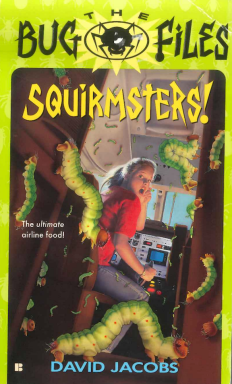 Do “nature run amok” novels qualify as monster novels? Is a coordinated attack of army ants as monstrous as a mob of abominable snowmen? I say “yes.” Rats, worms, spiders, ants, a plague of flies, a swarm of bees, a flock of seagulls—when Mother Nature gets mad, she has a long list of creepy-crawlies on speed dial to do her bidding.

Squirmsters! is about thousands of ravenous caterpillars terrorizing an airplane during a three-hour flight from Seattle to San Francisco. In a way it’s like a nature run amok novel written by children’s author Eric Carle. Instead of eating pickles, ice-cream cones and lollipops, however, the mutant larvae feast on high school kids, metalheads, businessmen and various airline personnel.

In David Jacobs’s book, the caterpillars don’t morph into pretty butterflies like they do in Carle’s classic kids book The Very Hungry Caterpillar. They stay true to their single-minded prime directive. “They’re man-made monsters,” explains Mrs. Medford-Graham, a federal agent assigned to the case. “You’ve heard of biological warfare, right? That’s what they are, bio-weapons.”

She continues: “They were an experiment that never should have been. DNA engineers took a destructive insect pest and turned it into a weapon of war. The finished product was … Squirmsters!”

It was a silly name, of course. But so were Fat Man and Little Boy (nicknames given to the pair of atomic bombs dropped on Hiroshima and Nagasaki). Squirmsters had the same kind of devastating potential albeit less explosive. Regular unaltered caterpillars were infinitely destructive to plant life, and super caterpillars were living weapons that could devour crops, create famines and drastically thin out communities.

Accidently released from their cargo bay transport container, the Squirmsters quickly invade the aircraft’s cabin looking for a snack. Seven unlucky passengers immediately succumb to the hungry horde. “Each larva was a feeding tube with a mouth at each end,” says the author. “The gurgling sound they made was like a bubbling caldron of boiling starch.”

But don’t worry. With the help of a flare gun and a contrived plot device, the Squirmsters are ultimately destroyed in a fiery explosion. Good riddance, says Glitch Wade, one of the six lucky survivors. “There goes the second deadliest species on the planet.”